All you need to know about Rann Utsav, Kutch, Gujarat

What is White Rann? 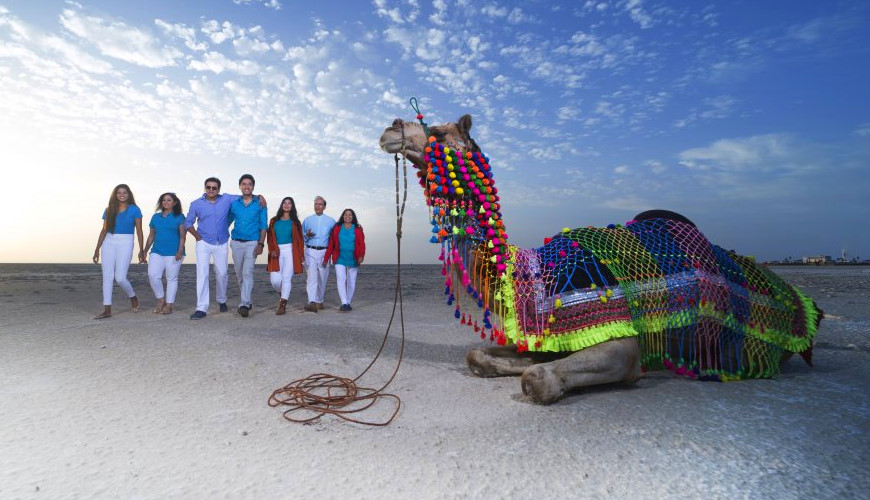 Located at the far Western edge of Gujarat, Kutch had never been a part of a tourist’s bucket list. The White Rann was always an option for tourists from Rajasthan for a desert view on their way, which was beyond the Thar desert.

The earthquake of 2001 left Bhuj, Gujarat devastated, claiming lives of over 20,000 lives, injuring over 1.67 lac people, destroying over 3.4 lac buildings, including huts and commercial spaces around Safed Rann Kutch.

The city had to be rebuilt from the scratch as a White Rann Resort, which is when the Gujarat Government, under the able leadership of the then Chief Minister Shri Narendra Modi, developed an exclusive space called Tent City of the Safed Rann as White Rann Utsav, apart from empowering local communities  at Rann of Kutch White Desert, who make a living by selling handicraft items, artifacts, ethnic apparel, etc.

What is Rann Utsav? 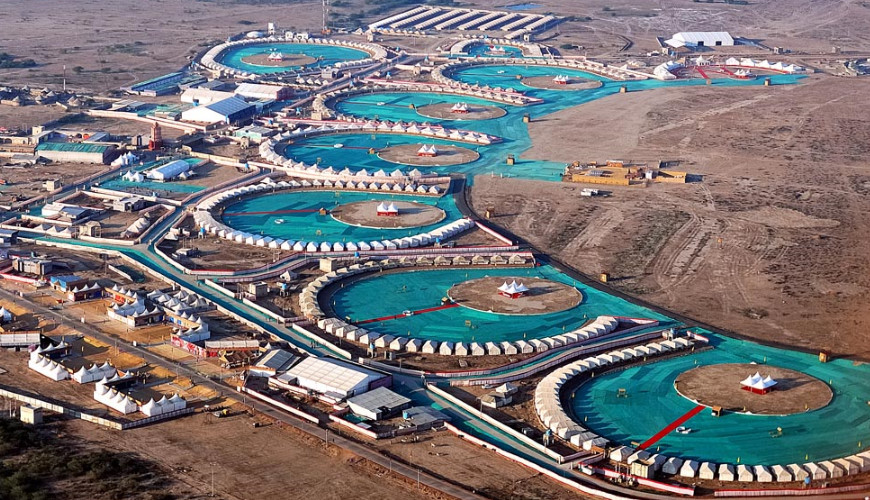 White Rann, also known as Safed Rann is a geographical marvel spread across 7,505 sq miles in the Thar Desert. It is a salt marsh with white sands across its horizon. This marshy Kutch Rann landscape is transformed into a thriving tourist destination that attracts millions of people year after year from across the nation as well as the globe.

The White Rann is formed only for a few months of the year and remains sea backwater round the year, the ‘Rann’ means Salty Marshland and ‘Utsav’ means festival. So, ‘Rann Utsav’ means celebration of the salty marshland formation and the stunning experience it offers to its visitors of Rann Mahotsav.

This celebration is accentuated by Rann Utsav Tent City, a city in its literal sense, wherein the entire city is created during Rann Kutch Festival and dismantled every year including the entire infrastructure, using over 15,000 Tons of materials to build the Tent City.

Since its inception, the Rann Utsav booking has multiplied exponentially, attracting over 5,00,000+ visitors from 20+ countries, 350 Tents across 9 Clusters and spread in an area of 5,00,000 sq. mt.

Lallooii & Sons, a leading events and exhibitions service provider are the operators of the Rann Utsav, along with TCGL (Appointed under a Private Public Partnership model). Since its inception, this collaboration has been adding value to this desert festival, introducing new concepts and features to White Rann Utsav, every year.

Right from the experience of staying in premium tents at Dhordo village, camel rides and daily trips to the Great Rann and to nearby villages rich in craft and folk traditions, old temples and historical landmarks, the Rann Utsav has something for everyone.

When is Rann Utsav organised?

Organised every year between October/ November and February, Rann Utsav is one of the most eagerly awaited tourism events not only in Gujarat but also India.

Quick tip:
The tents are limited in number so if you are planning to visit Rann Utsav, you’d better make it fast and book only on its official website www.rannutsav.net

When can we visit Rann Utsav? 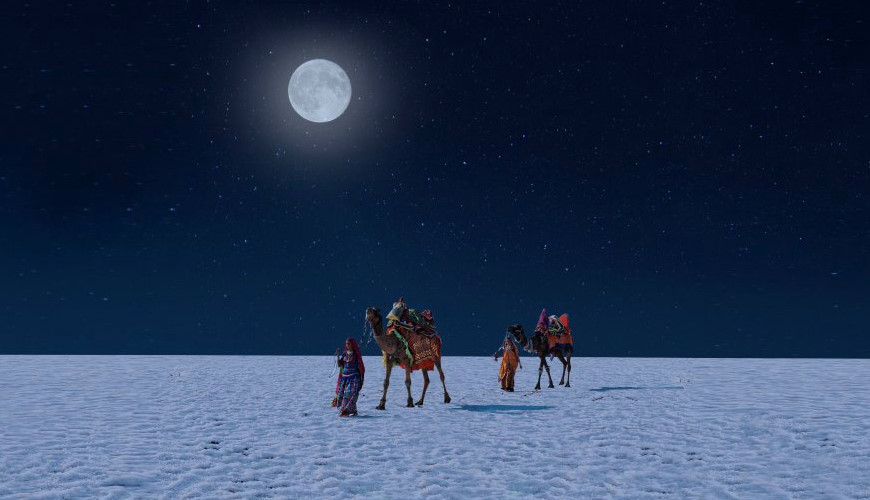 The best time to visit Rann Utsav Kutch is on full moon days that fall during this period. However, if you wish to visit the place at peace with lesser people and are willing to part with the beautiful experience that full moon has to offer, you can visit anytime between October and February. You can also go for sightseeing in Bhuj during Kutch Rann Utsav.

Quick tip:
Don’t forget to carry warm clothes with you as it can get really cold at Rann of Kutch, White Desert.

How is the weather at Rann Utsav?

How does Tent City offer cultural experience of Kutch? 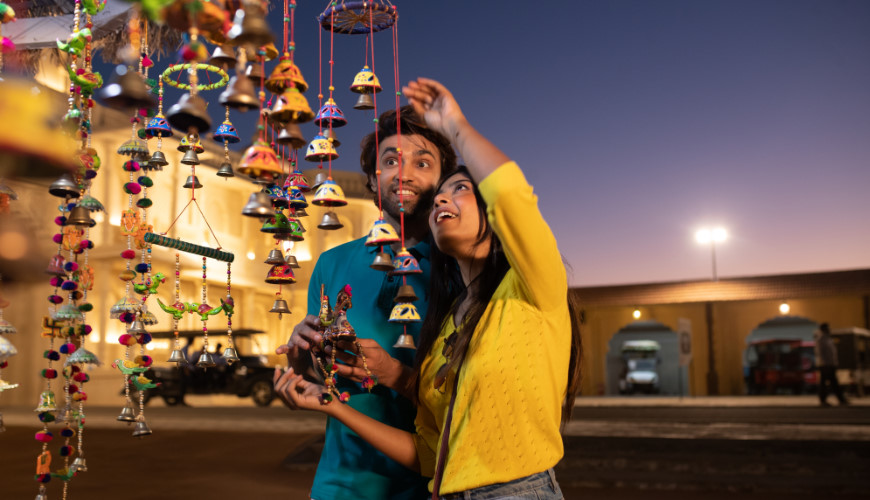 As you step inside Rann Utsav Tent City, you will find yourself surrounded by local art and artifacts at the Haat, replete with Rann Utsav activities, intricate embroidery, terracotta, block printing and wood carving and much more.

The cultural activities at Rann Utsav have been one of the key highlights of Rann Kutch Festival and Tent City Rann Utsav activities, where we showcase not only local artistes on the stage, but also invite unique dancers, performers, including the Siddi community who perform tribal dance to leave the audience in raptures at the Tent City Rann Utsav. 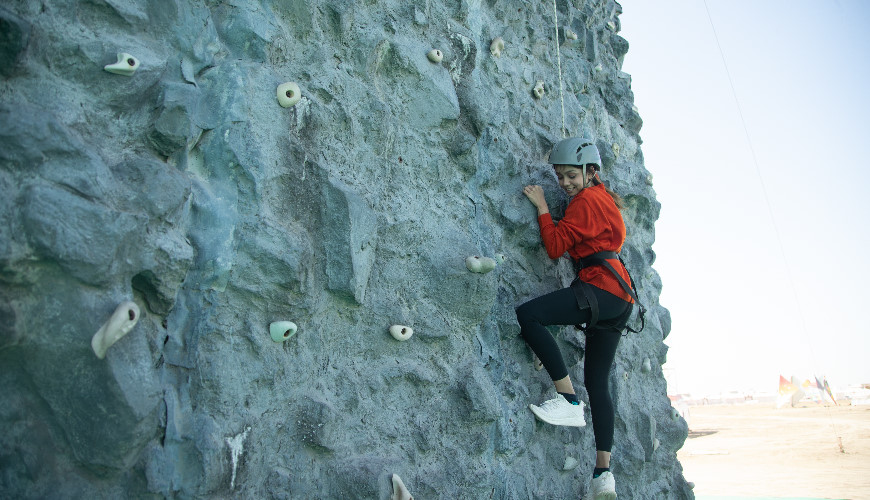 Far from just lounging around in luxury tents, the Tent City offers you a choice of exciting activities ranging from Rock Climbing, Rappelling, Giant Pendulum, Zipline, Archery, ATV Rides, Paintball, Paramotor, Segway, Camel Cart, Star Gazing, Trikke, daily sightseeing, and much more. To sum it up, there’s something for everyone at Rann Utsav, making your Rann Utsav booking worth its price, apart from a guided itinerary that offers you the elegance of the best Rann Utsav hotels and perks of Rann Utsav Hotel booking.

Quick tip:
Carry an action camera like GoPro with you to document your adventure better at the Rann Mahostav.

Why is full moon night so important at Rann Utsav?

The White Rann is made of white salt flats, which reflects in the gleam of a full moon at Rann Utsav,, lending a distinct charm to the entire white desert. The moon, in its full silver glory looks bewitchingly beautiful, leaving every beholder awestruck by its splendour during Full Moon Kutch Rann Utsav.  So it makes sense to opt for Rann Utsav Full Moon Package to block your Rann Utsav Full Moon dates.

What are the sights to see at Rann Utsav? 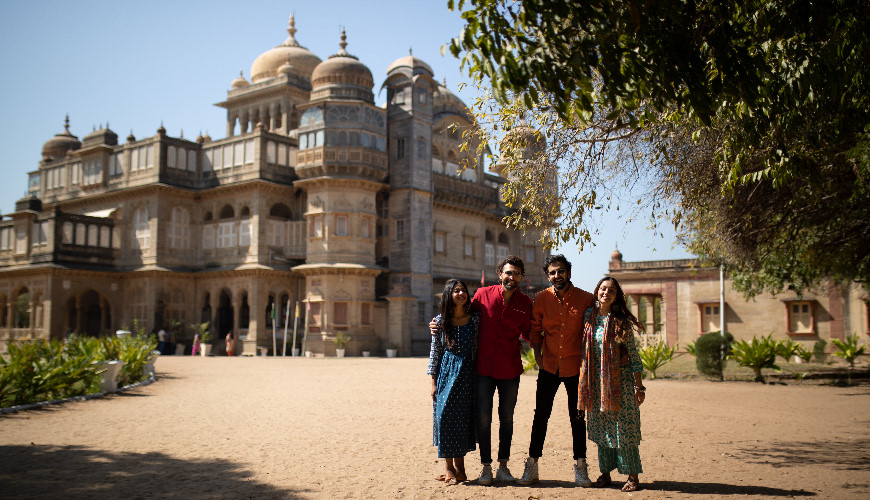 A geographical marvel that continues to leave its beholders awestruck, Kutch is surrounded by the Gulf of Kachchh, Great Rann and Little Rann, which remain dry with white mud and white salt during summer and transform into islands during monsoon, owing to its proximity to the sea and rivers.

25 kms north of Khavda, the top of Kala Dungar i.e. the Black Hills is the highest point in Kutch, at 462 m, where you feel like you are at the edge of the earth.

One of the finest beaches on Gujarat’s coastline, – this beach is perfect for a family getaway. Enjoy fresh coconuts, swim in very pleasant waters, and behold a magnificent view of the coastline as the sun cools its heels in the sea.

Built in 1929 by Maharao Vijay Singhii, the palace is an eclectic blend of architectural styles, offering a panoramic view of the sea and is a favourite destination of Hindi filmmakers.

A memorial dedicated to Shri Shyamji Krishna Varma from London, who built India House, a hideout for Indian freedom fighters, which has been recreated at Mandvi.

Located 12 km from Bhuj, this traditional crafts village nestles a close-knit community of artisans. Apart from the village of artisans, the Vande Mataram Museum has replicas of Red Fort and Indian Parliament and also stages an engaging laser show.

What are the Covid-19 related safety measures taken by Rann Utsav organizers at Rann Kutch Festival? 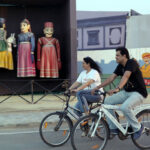 Free-Wheeling around the Rann